Plasma cleaning for the study of biomaterials

The Henniker HPT-100 benchtop plasma system is being put to good use within the Department of Polymer and Biomaterials Science at the West Pomeranian University of Technology, Szczecin (ZUT) where Dr Peter Sobolewski and his colleagues are working in the area of polymeric biomaterials.

Biomaterials are engineered materials intended to interact with biological systems, for example during the use of a medical device or implant. A growing interest in the fields of regenerative medicine and tissue engineering has led to a need to develop new biomaterials, especially polymers, suitable for use in soft tissue implants or as scaffolds for tissue regeneration. The synthesis and study of such polymeric biomaterials is the focus of Dr Sobolewski and his colleagues in the Department of Polymer and Biomaterials Science, ZUT.

While end-use forms of biomaterials can take on many shapes and sizes—ranging from nanoparticles to nano- and micro-fibres, or macroscopic objects (sutures, bandages, implants)—it’s their surfaces that play a crucial role in determining their so-called ‘biocompatibility.’ This is essentially the ability of the material to perform its function while being tolerated by the tissue of the host—producing an appropriate host response. Thus, numerous techniques are used for studying the surfaces of biomaterials, as well as their interactions with proteins and cells.

One strategy to precisely study various polymer surface interactions and properties involves preparing carefully controlled thin films using spin coating. Depending on the study, an appropriate substrate, such as a sensor or glass coverslip is coated with a layer of polymer in the range of 100 to 300 nm by depositing the polymer in solution and rapidly rotating the substrate to spread the film evenly and evaporate the solvent. To obtain reliable data, the films must be pristine—free of defects, such as pinholes, or contaminants, such as dust. Of course, if the substrate is not pristine, neither will be the film. As a result, cleaning and preparing substrates for the spin coating procedure is an absolutely crucial step.

At present, Dr Sobolewski and his colleagues have been focused on the study of a family of poly(butylene succinate-dilinoleic succinate) copolyesters (PBS-DLS), recently developed within their Department.[1,2] These copolymers are characterized by excellent tuneable elastomeric properties, biodegradability, and can be synthesized from bio-based monomers using non-toxic catalysts, including enzymes.

Recently, Dr Sobolewski studied the interactions between these new polymers and two proteins that play a crucial role in wound healing and cell-material interactions: fibronectin and fibrinogen—components of the provisional matrix.[3] This study involved spin-coated thin films prepared on quartz crystal sensors for analysis using a quartz crystal microbalance (QCM). The results predict excellent cell-polymer interactions. However, the quartz substrates are not transparent making direct visualization of cell adhesion a problem.

This was the challenge faced by Master’s student Nina Kantor-Malujdy: preparing analogous thin films on a transparent substrate. Together with Dr. Sobolewski, she selected glass coverslips as suitable substrates and set out optimize the spin coating process. Unfortunately, the as-manufactured glass coverslips were contaminated with organic residues that made obtaining pristine coatings difficult. Ms. Kantor-Malujdy followed a previously established cleaning protocol involving sonication in isopropyl alcohol, then acetone, and finally drying using filtered compressed air. This protocol was time-consuming, low-throughput, and involved extensive handling and manipulation of each delicate coverslip—particularly during drying. 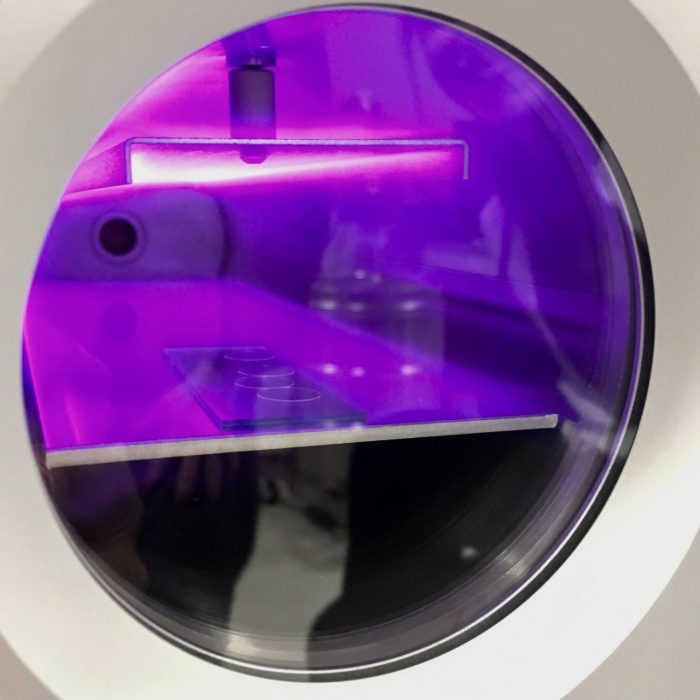 At this point, the team decided to try plasma cleaning using their new Henniker HPT-100 instrument. In fact, Dr Sobolewski reports that they obtained the protocol from an article Tweeted by @HennikerPlasma. The process parameters were: 30s, 100% Power, and 50 sccm airflow. The effects were immediately apparent, as the water contact angle dropped from ~80° to virtually zero, as compared to ~60° for the solvent cleaning method. Thus, not only were the organic contaminants removed, but the glass also became activated, having a high surface free energy.

Ms Kantor-Malujdy confirmed that the effect could be leveraged in the next steps of her process, by monitoring the water contact angle over time: after 24 hours, it was still ~5°, meaning she had plenty of time for the spin coating stage of the process.

Importantly, laser scanning microscopy confirmed the glass was free of any contaminates but had not been etched: the roughness parameter Ra was slightly reduced from 11 nm for as-manufactured to 10 nm—both measurements virtually at the sensitivity limit of the technique.

“Using the Henniker plasma system significantly reduced the time of preparing samples, because cleaning the cover glasses was an integral part of the process and previously was laborious and took a substantial amount of time.”

“Plasma cleaning yielded clean and dry coverslips in 30 s, without etching the glass or needless handling. The Henniker instrument was easy to operate with a user-friendly interface.”

With the substrate preparation sorted, Ms Kantor-Malujdy could focus on the spin coating process. Unexpectedly, the protocol developed for quartz crystal sensors was not suitable for glass coverslips. Thus, before the team could proceed with their cell studies, she had to develop a new optimised spin coating protocol. The time saved on cleaning the glass coverslips turned out to be crucial! In the end, she needed to change solvents from dichloromethane to tetrahydrofuran, which is less volatile.

Just before the lab was shut down by the COVID-19 pandemic, they conducted the first experiment, using L929 mouse fibroblasts, a workhorse cell line in preliminary biomedical studies. The results were very encouraging: after 24 hours in culture they observed robust adhesion of cells to the experimental copolymers and similar morphology of the cells to tissue culture plastic control surfaces. 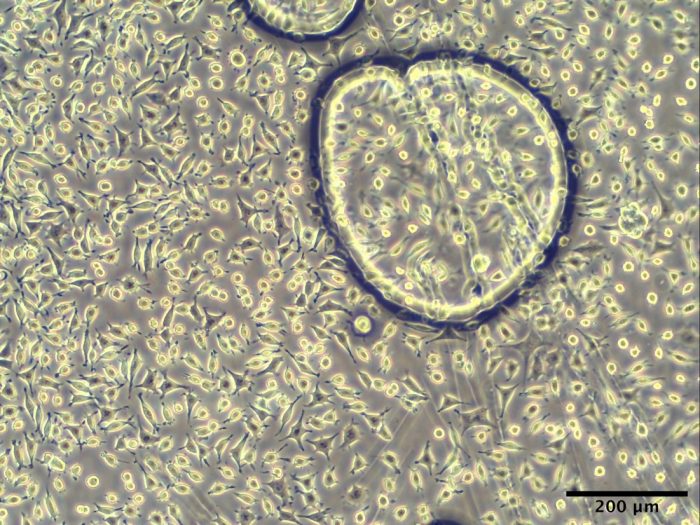 “The results were very encouraging: after 24 hours in culture they observed robust adhesion of cells to the experimental copolymers and similar morphology of the cells to tissue culture plastic control surfaces.”

The next steps of their research—once the COVID-19 pandemic subsides enough to permit a return to the lab—will involve careful quantification and replication of the initial study, as well as live-cell imaging, to monitor the adhesion in real-time. Of course, keeping cells alive and healthy during various experimental manipulations and live-cell imaging can be challenging. As a result, it’s important that the methodology of preparing the substrates be as reliable and reproducible as possible. Thanks to their Henniker HPT-100 plasma system and the diligent work of Master’s student Nina Kantor-Malujdy these aspects have been streamlined and optimised.

“These coatings are a model of the surface of a device that may be an implant in the body. To determine the biological properties and thus optimal applications of these new copolyesters, we need to study whether cells will attach and proliferate on such surfaces.”

“The complexity and variability of biological systems make our studies challenging, so I was extremely happy that the process of cleaning and spin-coating the glass coverslips could become simple and routine. I’m grateful for the excellent work of Master’s student Nina Kantor-Malujdy.”

“Regarding the plasma system, we needed a cost-effective plasma system that could be easily set-up and produce the right process for us. We were already thinking about cleaning samples but also wanted to use it for activating polymer surfaces. Finally, we’d like to move into the area of plasma polymerization. We chose the HPT-100 plasma system from Henniker Plasma, because of the flexibility of the system and the excellent support from Henniker Plasma.”